More than ever before, we live in an age where looks and image is everything.

This contemporary infatuation is primarily down to the ever growing influence that social media has on both the social and working life’s of millions of people across the globe whose populace seem completely and utterly devoted to detailing the mundane and humdrum in exquisite detail. This means that the minutiae of their day to day lives are regularly exhibited on the likes of Facebook, Twitter and Instagram; an obsession that shows no sign of ebbing away in the same manner as other worldwide crazes (remember Friends Reunited?) have in recent years.

Much of this is down to the advent of the 'selfie', the self-portrait photograph that is typically taken by either a digital camera or camera phone held in the subjects hands or supported by the self indulgent abomination that is the 'selfie stick'.

The resultant images are very much ego driven as they are taken (and often retaken on numerous occasions until the subject is happy with the end result) with the intention of making the subject look as good as possible.

No-one ever posts a selfie which doesn’t appear to make them look perfect.

Wanting to look good is not new of course. We all have at least one mirror in our house.

But there is a more than subtle difference between the motivation that laid behind wanting to look good even just a decade, a decade and a half ago and that which drives the desire in today’s world.

Which is not only wanting to look good but to ensure that everyone else sees and appreciates how good you look.

And acknowledges you for it.

It could even be argued that, for some teenagers, a scattering of ‘Likes’ from fellow social media uses in response to their posting a photograph of themselves is regarded as a more valuable and sought after ‘currency’ than anything else-including good grades at school.

After all, if you look good then, surely, anything is possible, no matter what your other drawbacks or disadvantages in life might be?

In this land of the super ego, the attractive boy or girl is a latter day god.

Take, for example, the case of Kim Kardashian.

She is a modern day superstar. Powerful, wealthy, influential and much loved, even worshipped by her millions of fans. That rise to fame has not come without notoriety however. Her friendship with socialite Paris Hilton for example, something that was, conveniently, and almost certainly deliberately, followed up by a convenient  ‘expose’ that featured her and singer-songwriter ex-Ray J.

Instant fame followed with the production and release of a reality TV show which is, even today, shown back to back on a popular digital TV channel.

Kardashian had, it seemed, become famous for being famous. Earlier this year she was reported to have accumulated total earnings of $53 Million.

But she wants more. Much more. Because she has realised the biggest common denominator amongst her fans is that they all want to look and dress like her.

That look, the one  that Kardashian has, and is, championing is, not to put too fine a point on it, a simple one: a tiny waist with a shapely rear. It’s a classic look, yet one that, albeit temporarily, was lost within the proliferation of stick thin models and the championing, briefly, of size zero.

Kardashian may appear to be the bearer of a the fluffy exterior. But don’t let that fool you. Underneath that beats the heart and mind of a hardnosed business woman. It’s fact of business life that you don’t become as wealthy or as successful as she is without a lot of industry savvy. And her savvy, primarily, is connected with fashion and fashion trends.

She has, rightfully, championed the corset as a contemporary must have, an item of clothing which you should never do without, one which you can never have to many to select from in your walk in wardrobe. She has even put her name to a series of exciting new designs and looks which, when worn, fully demonstrate both her hard earnt looks and shape, a figure which, according to The Corset Centre website means she has a “banging body”.

Contemporary praise even if the description is hardly poetic. 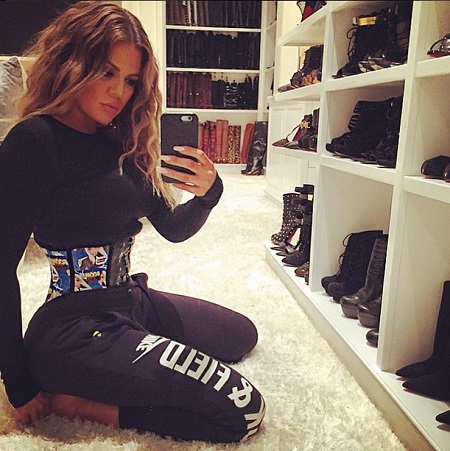 Kardashian’s siblings have also benefitted, image and career wise, by adopting big sisters love and knowledge of the industry. This photograph of her younger sister demonstrates how a corset can be worn to ‘train’ the waist (ie) a way to slowly reduce your waist size by wearing that corset. Waist training is a method that slowly reduces your waist size by wearing a corset. It’s hardly new or revolutionary. Waist training started as a discipline back in the sixteenth century. The ever canny Kardashian (you can’t help but start to respect her by now) has therefore latched onto a time honoured technique and fast forwarded it into the twenty first century.

Her chosen look and the means by which she has achieved it is now being copied by women all over the world with most of them plugging into, one way or the other, the training programme and corsets she is both promoting and wearing.

With corset design, materials and manufacture now at a peak in terms of care, quality and expert peer to peer advice being available, a corset is, undoubtedly, if chosen with care and attention, a timeless and beautiful item of clothing, one which has the unique appeal of looking stunning as well as being extremely comfortable.

There will be those who say that the purchase and wearing of a corset today is unnecessary,  and that women liberated their bodies in the sixties and seventies by throwing away their corsets and girdles.

But when you consider the care and attention that goes into the design of the modern corset, the quality of the materials available and the sheer beauty and range of designs there are for all to choose from, this argument surely becomes a weak one?

No-one is forcing anyone to wear a corset and demand, if anything, is growing and continues to do so. It is, and remains, a stunning piece of clothing that complements both the body and the confidence of the wearer much more so than just being a modified work out tool solely designed to change someone’s appearance.

With Kim Kardashian an unlikely but very prominent and welcome modern day champion.

Posted in News By

You have no items in your shopping cart.